“But Doc, It Feels So Good to Crack My Own Neck!” 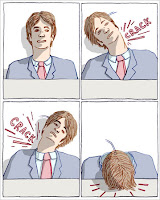 Everybody knows that guy that pops his own neck. You know, the guy who is sitting by you who grabs his chin and yanks it from side to side waking up your co-worker or the sleeper in church who suddenly dreams they are being shot with a machine gun. Maybe you are that guy. If you are let me pass on some good advice. STOP!

First of all, you are annoying every one around you. Second, you are doing damage to the ligaments and joint capsules of your neck.

Here is how it happens. When you get a hankering to pop your neck it is usually because one of the 33 joints in the neck is not moving as much as it wants to, which can cause inflammation, stiffness, and a decrease in proprioception (the sensation that tells us what the joint is doing).

When you try to get that joint moving using your chin as a long lever you apply a very non-specific shearing force to the entire neck which works as a unit. Under force the the most pliable joint will move and pop. Perpetual force over a period of time will cause the joint to be hypermobile.

Because the neck functions as a unit, to compensate for the hypermobility of one joint, other joints will become fixated or hypomobile. Joints that move too much or too little are dysfunctional joints and will degenerate quicker than properly functioning joints.

Popping your own neck also creates a viscious cycle. You pop your neck because a joint isn’t moving. The joint you pop makes it feel better because of a natural endorphine release but those joints are not the ones that need to move. In fact, the joints that need to move become less mobile because they now have to compensate for the joints that move too much because you keep moving them. Also, the good feeling you get when you pop hypermobile joints only last a short while.

In addition, the combination of overly hypermobile and hypomobile joints in the neck make it very difficult for your chiropractor to give a specific, effective adjustment because with overstretched ligaments it is very difficult to get the right tension to adjust the proper vertebra.

So please, do yourself, everyone around you, and your chiropractor a favor and stop turning your neck into silly putty for a 30 second high and a cool sound.