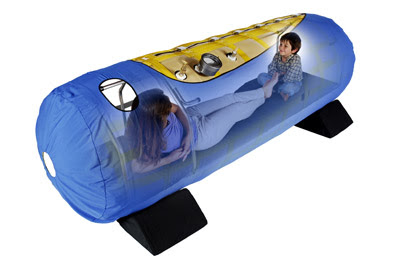 I took the time today to spend an hour in my hyperbaric oxygen tank. I have decided to take at least one hour a week to decompress (or really compress if you are being literal). The benefits of hyperbaric oxygen therapy are vast. Ultimately though, it comes down to a very simple concept.
If you think of the cells of our bodies like little engines the analogy is easy to grasp. There are two major things that make the engine work. It needs fuel and it needs oxygen to burn the fuel. The more oxygen the quicker it will burn the fuel.
We have plenty of fuel in our bodies but we have a limited amount of oxygen that we can take into the cells of our bodies. The reason for the shortage is because oxygen gets into the cells by piggybacking on red blood cells. We have a limited number of red blood cells in the body at any given time. (If you want more spend some time in high altitude where the body will adapt to the decreased available oxygen in the air by creating more red blood cells). Red blood cells also have a certain number of oxygen molecules that can bind to it. Oxygen binds to red blood cells in the lungs and then oxygen is transported to the cells of the body.
This is where hyperbaric comes in. If you increase pressure you can dissolve oxygen into liquid. So, all of the oxygen in the air around us and in the body, but not in the cells, can now be transferred into the cells. More oxygen in the cells equals faster burning motors.
So what? When cells burn quicker we observe things we wouldn’t normally see. For example, in children with Autism new brain patterns develop. In stroke victims, oxygen can reach the damaged area and start the healing process. Athletes use is it to recover from the stress, strain and injuries inflicted upon them. The list of benefits goes on. We have seen success with MS, stroke, autisms, chronic fatigue, injury recovery, recovery from chemotherapy, lyme disease, cerebral palsy, wound that wouldn’t heal, and so much more.