The Most Pressing Issues Regarding Healthcare!

admin
3 Comments
Categories: Uncategorized
I joined a group on LinkedIn for healthcare providers who want to discuss issues regarding health. The title of my blog is essentially one of the topics that was raised. It was interesting to read that most of the people discussed the issue of reimbursement for healthcare. My response was a lot different and set up in a way that hopefully, the others ranting about money will see the forest despite the trees. Here is my response:

In my humble opinion, the problem with so called healthcare today is that it is, in fact, rarely health care. I would argue that all of our healthcare problems are because we, as a society, focus on symptoms. This is true with the cause of disease and administrative woes. Although we are making strides towards some early detection studies we as patients, providers, administrators and insurers mostly give lip service to the underlying causes of disease. Instead, as patients we rarely give a thought towards our health unless there is a symptom bad enough to warrant an appointment with a doctor. Most doctors are not interested in seeing someone who does not have significant symptoms and administrators know that there is nothing to bill if there is no diagnosis based on symptoms and less if there is no medication or procedure that can be done. Symptoms, symptoms, symptoms and not how can I climb the ladder of improved health everyday of my life.

This focus on symptoms is perpetuated by the percieved notion that someone besides the individual is in charge of healthcare. Concern for one’s health should first and foremost rest on the shoulders of the individual. When there is a sincere desire to be healthy then the rest of us are there to show the way.

Today we argue about the fact that the government does too much or too little for healthcare. In addition, we blame insurers for not covering enough and doctors for being too busy to really help. This is all wrapped up in a ridulous sense of entitlement by individuals who, for the most part, have mostly themselves and their poor choices to blame. We assume people are not going to change so we have to change everything else to accomodate them.

Granted accidents happen and ill health is not always a function of unhealthy living, but if every individual felt responsible for his/her own health then the paradaigm completely shifts 180 degrees. In this scenario people reduce risky behavior because there is true risk involved. Loss of life, lifestyle and livlidhood is potentially on the line. They seek providers whom they trust can help in a manner that is cost effective and know that proactive healthy habits are also less expensive in the long run. If the majority of people thought and acted this way they would be healthier. Doctors would educate and coach and occasionally treat individuals with disease which would significantly decrease the taxing burden they bear. Insurance rates would be reasonable because fewer people would need to utilize the extreme measures to extend life that cost so much. In this way, insurance would be utilized as it is intended, to reduce the risk of losing everything in the face of an unfortunate circumstance; not benefits that we hope to use because we paid so much for them. Finally, the government would keep the hell out of the arena in which it has no business.

Complacency in the absence of symptoms and entitlement in the presence of is the disease of what we call healthcare today. Personal and individual responsibility to improve one’s health on a daily basis is the cure. 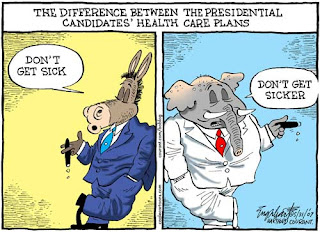