What do You Think of Socialized Health Care? 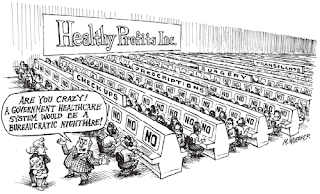 The debate is in full swing over socialized health care. It seems to me that it is only a matter of time before the politicians decide to take control of the rising costs. I can understand both sides. I am not going to even argue between both sides because it seems like the two sides are comparing apples and oranges. I think most agree that whatever we have right now is not a great solution for the masses. My point in witing this article is will it work in the US?

Now, I know what you are thinking, “It works in Canada and Europe and people are not as antagonistic or supportive as the two camps portray.” I agree. All of the debate is focused on whether it will be right for the people. But, just as in everything there are other parties involved. I have yet to see much discussion about whether the providers are going to go for this.
You see, the doctors in Canada and Europe have never really known anything different. They went to school with a certain expectation and are working under those circumstances. This will not be true for doctors in the US if we switch to socialized health care. Think about it this way. Most US docs went into healthcare because it is career where one can help and serve others while also enjoying a certain status and income level. Keep in mind there are two sides to this: the ability to practice as one chooses and the money.
Lets talk money for a bit because that seems to be the major focus (though I will argue that for the majority of docs it is the lesser issue). Going to professional school is expensive. A lot of time and money is invested in the education of a doctor. As of now, the compensation in most cases is satisfactory but not as good as it used to be. I wonder what compensation will be under government regulation?
The real issue, however, is not money; it is control. Doctors have taken a beating since the onset of HMO’s. Take a poll of any profession and job satisfaction has more to do with the ability to affect outcomes. If HMO’s are bad wait until the government decides to take over. Medicare is the classic example. Medicare dictates very specifically what a doctor can and cannot do. In additon, if you feel a procedure is warranted but the government does not, guess who wins? Accountability is good, but when a doctor spends more time justifying his course of treatment than actually treating people satisfaction starts to wane.
The question then becomes how many doctors are going to stick around with changes that will limit their ability to treat patients the way they want to and with a cap on how much money they can make? The other question is whether the government will allow doctors to opt out of universal health care and take private pay only? If they don’t, will enrollment at professional schools decrease and will you see more doctors leaving the field for less stressful and more profitable professions? If they can do private pay how many docs will opt out? Either way, what will our access to health care look like? I don’t know the answers for sure but I can tell you as a health care professional I would opt out so as to avoid the pitfalls and the headaches of governmnt controlled “sick care” and if the government doesn’t give us choice… well I guess I will have to cross that bridge when we get there.

You many not know this, but there is a word which is either the bane or the glory of almost every chiroprator out there. That word is “subluxation” pronounced sub lux a (long a) shun). Don’t ask why there is so much controversy. Suffice it to say that people squabble over semantics. What is important is to understand the concept.

The literal translation of the word subluxation is minor dislocation. “Sub” means minor or small and “to lux” means to dislocate. When the modern founders of chiropractic started using the term, the thought process was that vertebrae would sublux from its natural position. This minor dislocation would then pinch on the nerve root which exits in between the vertebrae. Pinching the nerve root wouild then lead to poor communication along that nerve channel to the intended organs. Poor communication would then lead to disease.

Makes sense, right? Well, through the years we have learned more. First off, it doesn’t take a dislocation to cause problems with the nerve root. All it takes is a little bit of irritation. This can happen from direct contact from the vertebra, muscle, ligament, whatever, or from inflammation in the area. The point being, the vertebra doesn’t have to shift and pinch the nerve to create what we think of as a subluxation. If the joints of the vertebrae are funcitoning properly in any form that is enought to create irritation of the nereve root and therefore disease.

The goal then for chiropractic patients is to strive to reduce one’s subluxations in order to improve one’s health. So, when we get down to it, chiropractors find these areas of dysfunction and help train the joints to funciton properly.